The previous day had been supreme. A little scary, but supreme all the same. Our eyes had rested upon a lioness writhing in the dewy grass – with what litheness, and sheer ecstasy – just about five paces from a tree beside which stood a giraffe in all her majestic glory. On our left was an elephant lumbering towards us, in our very own direction, giving us quite a fright but in a thrilling way. The game-ranger frantically tapped his gun which he further explained to be a signal, and his efforts to subdue the elephant’s arrogance were rendered effete. Not forever though, for the elephant, restive as it was, decided to stray off and finally slunk away into the glade nearby. Ibra, whom I beg you to remember as our driver, was in a pitiable state of uncontrollable agitation and reaction, with every nerve in a twitter. That was way before Bill chipped in with a joke that indeed helped jolt us back to a merrier mood: that if we offered Ibra to the lioness as a meal, she wouldn’t eat him, for he was too bony. A little mean-spirited, yes, but funny at the same time, because Ibra is decidedly gaunt and scantling thin, who, I’m sure you would also agree if you clapped eyes on him, can buckle down under the weight of a mere fly. Thankfully, he was never offended. Not even a whit!

That was yesterday, and today commences with packed breakfast as previously planned. It was indeed a great time at Paraa Safari Lodge, so you wouldn’t blame me for wincing at the thought of leaving. Everything had been superbly arranged, and there I am, sad and wistful, waiting for the ferry to transport us to another location. Under the tree sat a certain blind man in cheerful spirits, along with about six of his comrades, singing and fiddling with musical instruments that appear to have been carved from wood. The music that wafts from them is mellifluous (I like that word!). Their voices are merry. The poignant songs are but genuine praises about Uganda, and I understand some, thanks to my rudimentary Swahili. Ibra notices I’m bizarrely lost in the current of my own somber thoughts, and he suavely interrupts my reverie, his words whipped by the wind:

“You were deeply amazed at the same group last night at dinner; you must be a slave to local instruments!”

I gave a quick, imperceptible nod coupled with a sheepish smile as the ferry approached. It appears I am ready for the most imminent activity – the Chimps of the Budongo Rainforest.

The usually parched, dirt road had become somewhat muddy, and this was evidence enough that it had rained throughout the night. I was already in the know that we’d spend a full hour driving, and so I played Twenty-one Questions with Jack, a twelve-year-old strapping lad from Montana, who, whenever a baboon or two made appearance along the way, paused for a moment to take a quick picture. There were lots of them everywhere, and to these he threw crackers and bananas as he cackled with delight. His excitement, I observed, was most times ungovernable, but I later understood he’d only seen them in the zoo, and not in the wild like this. And before long, as though we’d traveled for less than anticipated, we were seen welcomed at the Budongo Eco Lodge with mugs of hot coffee, which Ibra and I quaffed in copious amounts due to the weather we found appallingly cold. Jack, we were informed, was not to track the chimps due to his young age, and the reason, among many others, was the formidably steep climb to await him. The mother, along with other guests, smirked at the joke, for Montana is trebly hilly and terribly mountainous. She had no qualm whatsoever as to sign the waiver releasing Budongo Eco Lodge from any liability, or threats, if encountered during the strenuous activity. We went ahead to hire gumboots and raincoats seeing that it was a rainforest. Bill, the oldest in our group, was to stay at the hotel since he had tracked the chimps before. So, after the briefing right before we left, he said to us all in his usual bantering fashion: “Happy tracking, friends! If you find anyone I might know, tell them I said hello!” It was impossible not to laugh.

Divided among three smaller groups, we were more than ready to track down these cousins of humankind. My group comprised only four people, the guide, Steve by name, being the fifth. I was the only young one, the three were septuagenarians (between 70 and 79 of age), and so we were to be slow and conscientious in our pursuit. Bending, we saw ourselves through the damp, spidery tracts, very attentive with our ears cocked for all sounds in the forest, as we had been advised by the soft-spoken, good-humored guide. I was beguiled by the passion with which he spoke, especially about the forest itself, and its hunters from nearby villages with whom the rangers contend day and night. He would never skip any detail about any tree species, their reaction to wet or dry seasons, the fruits the chimps enjoy, and he did all this with intervals of sudden pauses and quick nudges that we remain silent or still as though he’d heard something which could be of help as to indicate where the chimps could have possibly dispersed to. He would oftentimes speak on the radio-call with his fellow guides in a language unknown to us, as though communicating about the sounds he’d heard. His face, whenever he was communicating on the device, would crinkle with sternness, and whenever he was done with his communication, his mouth would effortlessly stretch into a hearty smile before proceeding with his animated commentary. At times he would simply ask if we had any question for him, and he was so grateful to answer, devoting the most careful attention to each of us, even when we thought our questions were silly. It wasn’t very long before we heard from a distance a cacophony of animal sounds followed by vigorous movements in the tree-tops. Steve didn’t need to see. He knew at once that they were nothing more or less than Colobus monkeys. They were three of them, black and white in color, and these, Steve went ahead to explain, were the Chimps’ favorite meal. However unpleasant that sounded, it was a good sign that the Chimps were not anywhere far, and could be hovering nearby.

To my inexpressible joy, I was not in error at all, for just after five minutes of walking, a louder mix of discordant sounds startled us all into sudden, submissive silence. “The chimps!” my neighbor’s voice reduced to a confidential whisper, imprisoned in the euphoria of our new discovery. We were reminded once again not to imitate or mimic them, for a sound may carry certain meaning in their own idiolect, something that might only expose us to danger if at all it meant “attack”. And so we just stood there and looked on in sheer amazement, our jaws already on the ground. The creatures seemed unbothered by our appearance and presence. They looked like they had a PhD in minding their own business, as Spacey would elegantly put it. Some were grooming each other, others moving heads now and then, their brown, lackluster eyes turned upon new comers. We kept hoping they would descend to the ground for a closer view, and it’s as though they heard, because it is exactly what happened. I noticed that two of them had lost a limb each. One was Kevin, who commanded a certain aura of reverential respect about him, and from time to time he was hopping from branch to branch with perfect dexterity. Another was Kalema, a female, who, according to her swelling as Steve clarified, needed a mate to copulate with. The mate wasn’t far. He’d been very patient, and appeared pleasurably excited. Call it curiosity, we had to wait for what was to ensue. We would never leave for the world, and as we waited for the ‘action’, Steve expressed effusive regret and discontent about the hunters who relentlessly make the Chimps’ lives a living hell. He adds that in most cases it’s the Chimps that suffer the wrath of these traps set by the hunters and poachers, even when it’s the antelopes that are targeted instead. My hatred towards the poachers was cruelly provoked. Not to digress much, we managed to see Kalema amenable to her mate’s tacit request, and the two copulated blissfully. This they did for not even more than a minute, and life was back to normal. We hadn’t even noticed that we’d been surrounded by the chimps in vast quantities. This, we thought, was supreme! I was almost prompted to take a selfie with one of them had I not been restricted by the 6-meter rule. They needed to be protected from us, Steve argued. After heeding a certain sound, they all left at once, leaving us breathless with excitement. On our way back we found a viper writhing across. We stood at once, motionless, letting it pass unmolested. 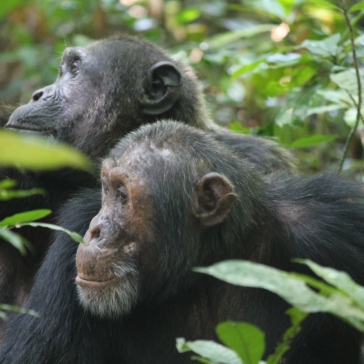 Returning to the hotel, Bill was already agog. He had seen the chimps too. They had visited. They rarely do. “I didn’t have to pay,” said he, rising from his armchair and grinning at my look of incredulity. “You went right to them, and they came right to us!” I couldn’t help thinking about Kalema, which actually translates as ‘disabled’. I still think about her even up to now. I know this is silly, but can I adopt her?

Article and all pictures contributed by Kenneth Kakande, who thinks himself to be a humble servant of the wild. 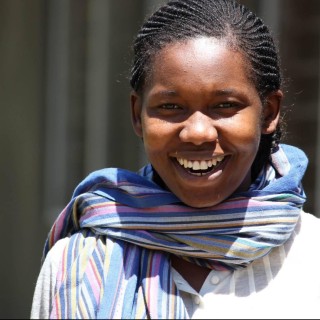